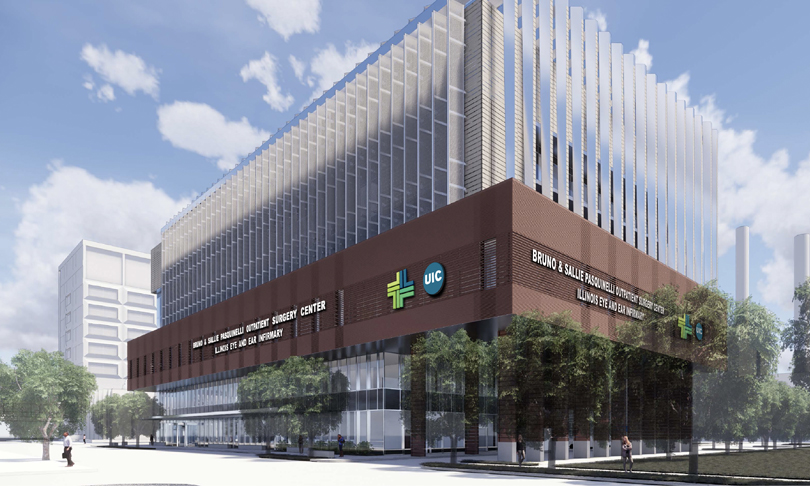 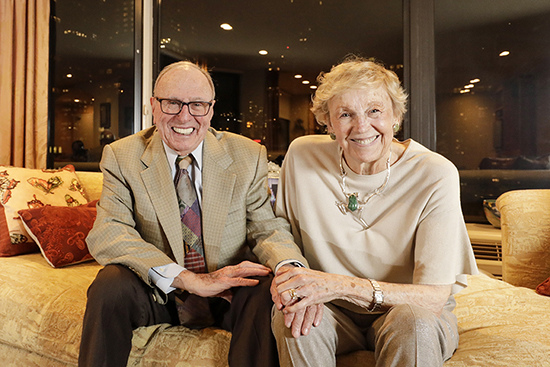 With a $10 million donation to the University of Illinois at Chicago, Bruno and Sallie Pasquinelli created the UIC Pasquinelli Outpatient Surgery Fund. The funds will be used to equip a new center for outpatient surgery at UI Health, the academic health enterprise at UIC.

The new building, which will be located on the corner of Taylor and Wood Streets, has been identified as a key part of the university's master plan to accommodate the increasing volume and complexity of surgical patient care, education, and research at UIC.

"The University of Illinois at Chicago and UI Health have an impressive history of providing innovative, patient-centered healthcare alongside its world-class academic programs and world-class research," UIC Chancellor Michael Amiridis said. "As Chicago's public research university and Illinois' leading provider of public healthcare, we are unwavering in our commitment to meeting and exceeding the needs of our community of students and patients. It is through the generosity of people like Bruno and Sallie Pasquinelli that we have the opportunity to change lives through these programs."

"Our surgical program has grown so that we are operating at or beyond capacity," said Dr. Enrico Benedetti, head of the Department of Surgery at UI Health. "The Pasquinellis' generous gift will allow us to give patients needing outpatient surgery more comfortable, state-of-the-art space, and it will free up our inpatient operating rooms to take on additional, more complex cases."

About half of the surgical cases at UI Health are outpatient procedures, with a significant portion of its outpatient volume serving patients needing orthopaedic, ophthalmologic, and head and neck surgical care.

Benedetti said the gift also will allow UI Health to expand its pioneering use of minimally invasive robotic surgery techniques for outpatient procedures.

In honor of the gift, the third floor, which will include eight operating rooms, will be named the Bruno and Sallie Pasquinelli Outpatient Surgery Center. The new, six-floor building also will feature the Pasquinelli name on its exterior.

Naming of the space was approved today by the University of Illinois Board of Trustees. Groundbreaking for the new building is planned for 2020.

Bruno Pasquinelli was the president and co-founder — along with his brother Tony — of the Pasquinelli Construction Co., a family business founded in 1956 that became the 24th largest homebuilding company in the U.S., with divisions in nine states and 120 communities.

Sallie Pasquinelli, an artist, co-founded the Village Artists art studio in the south suburbs in the 1960s. She also spent many years on the board of the Lyric Opera of Chicago and working with Aunt Martha's Youth Center.

The Pasquinellis have a long history of philanthropic giving to UIC, its College of Medicine, and the University of Illinois Hospital, and they have donated in excess of $4 million to the Department of Surgery at the College of Medicine since 2004. They also have supported scholarships at UIC's College of Business and the Honors College.

"My brothers, sisters, and I were all born at Mother Cabrini Hospital, so my family has an 80-plus year history in this neighborhood," Bruno Pasquinelli said. "In essence, I have come full circle. To have the Pasquinelli name on a building on Taylor Street, in this Italian-American neighborhood, means the world to Sallie and me. We want our family and our children to see this and for it to inspire them."

The $10 million gift is a record-breaking donation for IGNITE: The Campaign for UIC, which launched in 2017 and is now more than two-thirds of the way to its $750 million goal. One of the campaign's objectives is to strengthen connections between the university and its communities by expanding access to comprehensive and compassionate healthcare for populations across Illinois.

"We are grateful to the Pasquinellis for their generous support of our mission to improve the health and well-being of our community and to train the next generation of healthcare leaders," said Dr. Robert Barish, vice chancellor for health affairs at UIC. "With this gift, UI Health will be well-positioned to continue its trajectory as one of the nation's best public academic health enterprises, dedicated to the pursuit of health equity."