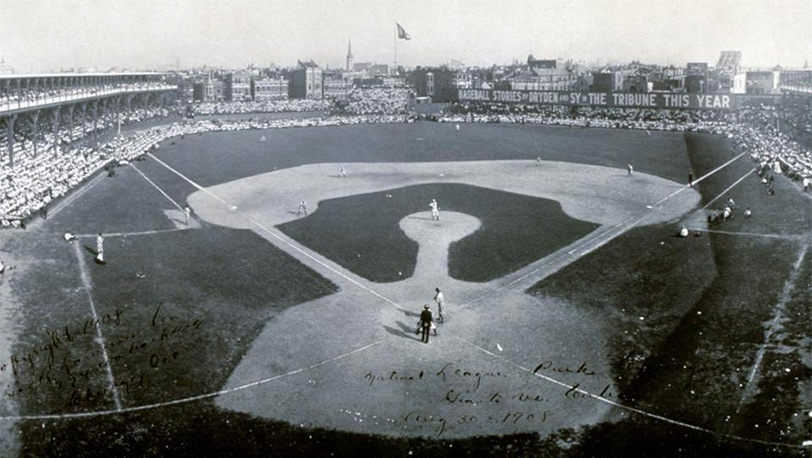 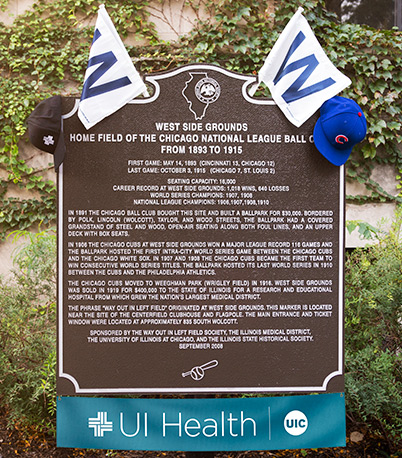 With the Chicago Cubs seeking their first World Series title in more than a century, there has been a lot of talk about 1908. A lot. But please indulge us in talking about it just a little bit more.

One of the most interesting things about UI Health is that we now sit on the site of the former West Side Grounds, the ballpark the Cubs called home in 1908 when — yes, you know, we know, we all know — they last won the World Series.

In the 1908 fall classic, the Cubs played two games at home — a 6-1 Game 2 win and an 8-3 Game 3 loss — en route to 4-1 series victory over the Detroit Tigers for their second consecutive and, amazingly, what still remains their most recent World Series title.

The Cubs played their final game at the West Side Grounds on Oct. 3, 1915, and a few years later the park was sold to the state of Illinois, which in 1920 demolished it to construct a research and educational hospital. Thus was the start of the Illinois Medical District, the largest medical district in the country.

This sign sits with an appropriate ivy backdrop in front of the NPI Building at 912 S. Wood St., roughly where the centerfield clubhouse and flagpole were located. The Medical Sciences Courtyard — which sits between the Clinical Sciences, Medical Center Administration, and College of Medicine Research Buildings on UIC's west campus — is where the outfield used to be.

Stop by and check out the sign the next time you're at UI Health. And hopefully soon, we'll be talking about the 2016 Chicago Cubs a lot more than their 1908 predecessors.