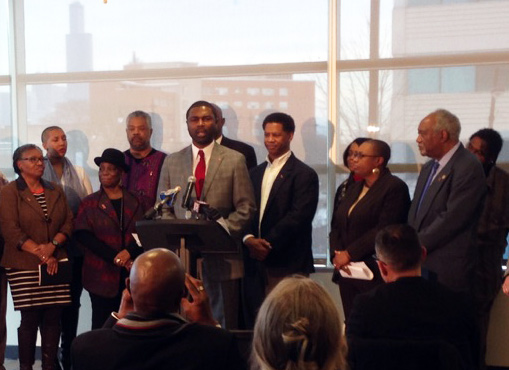 Joined by over 50 community leaders and members of HIV prevention nonprofit organizations, they urged all citizens to get tested for HIV, especially the African American community, which is disproportionately affected by the HIV epidemic.

Nearly half of the total AIDS cases reported and almost half of the persons living with HIV in the U.S. are Black, even though they represent just 14 percent of the U.S population, according to data from the Centers for Disease Control and Prevention (CDC). Health officials note that knowing one's HIV status, prevention education, avoiding or delaying sexual activity, decreasing the number of sexual partners, safer sex practices and getting into treatment, if infected, remain the most effective means of efforts to eradicate HIV/AIDS.

CDC recent progress report which lists Illinois far below the national average for persons ever tested for HIV. The present need for Illinois to be in full alignment with CDC's recommendation for routine HIV screening in Medical Settings to increase HIV screening across our state. Major advances in screening technology to detect HIV earlier and specifically identify people who may be in the acute phase of HIV infection where they are highly infectious and likely to spread the disease. Promotion of the HIV Testing Task Force subcommittee that focuses on removing barriers in medical settings to ensure routine HIV screening becomes a standard of care.

National Black HIV/AIDS Awareness Day:
National Black HIV/AIDS Awareness Day is a national HIV testing and treatment community mobilization initiative that targets Black communities, both domestically and internationally. The initiative was founded in 2000 by five national organizations funded by the Centers for Disease Control and Prevention in 1999 to provide capacity building assistance to Black communities and organizations.