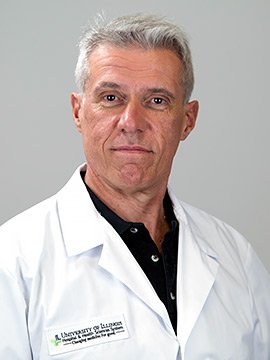 UI Health currently features one of the most recognized robotic surgical centers in the world, promoting the application of robotic surgery to the treatment of complex thoracic and abdominal diseases. UI Health doctors have pioneered more 30 robotic surgical procedures, including:

Our team's expertise in performing robotic-assisted, minimally invasive procedures ensures the highest standard of care for surgeries of the pancreas, lung, esophagus, colon, stomach, liver, gallbladder, and kidney, including the removal of cancerous tumors of the lung and pancreas.

Earlier this fall, the Department of Surgery hosted the Clinical Robotic Surgery Association's (CRSA) 9th Worldwide Annual Congress at the UIC Forum. The CRSA is the premier association for robotic minimally invasive surgeons and other healthcare professionals dedicated to the advancement of these surgical techniques, with the goal of strengthening the bridge between theory and practice for general robotic minimally invasive surgery.

"As UIC has played a large role in the scenario of robotic surgery worldwide, the UI Health Department of Surgery faculty, led by Dr. Enrico Benedetti, have demonstrated their long support of innovation in surgery by founding the Clinical Robotic Surgery Association. Much of the leadership and executive members of the CRSA are Department of Surgery faculty," says Dr. Pier C. Giulianotti, Chief of the Division of General, Minimally Invasive, and Robotic Surgery at UI Health and the Lloyd M. Nyhus Professor of Surgery in the UIC College of Medicine.

One of the highlights of the two-day congress was a live-streaming of five robotic surgeries from UI Health operating rooms:

The procedures all were completed within a 3-hour window the morning of Friday, Sept. 22. A panel of seven experienced surgeons moderated discussions between the operating room surgeons and the conference audience.

Live-surgery transmission is highly effective learning tool for both residents and experienced surgeons. The procedure performed by Dr. Fernandes was the first time a resident was involved in a live transmission with a dual-console system.

"As leaders of the Clinical Robotic Surgery Association, UI Health faculty have developed some of the most recognized robotic surgical centers," Giulianotti says. "The CRSA's Accreditation Programs were launched by the Surgical Review Corporation to support its mission of advancing robotic techniques. The Center of Excellence in Robotic Surgery (COERS) and Surgeons of Excellence in Robotic Surgery (SOERS) program designations help identify, cultivate, support and recognize robotic surgery facilities and surgeons that achieve defined standards for excellence in general surgery and related specialties."