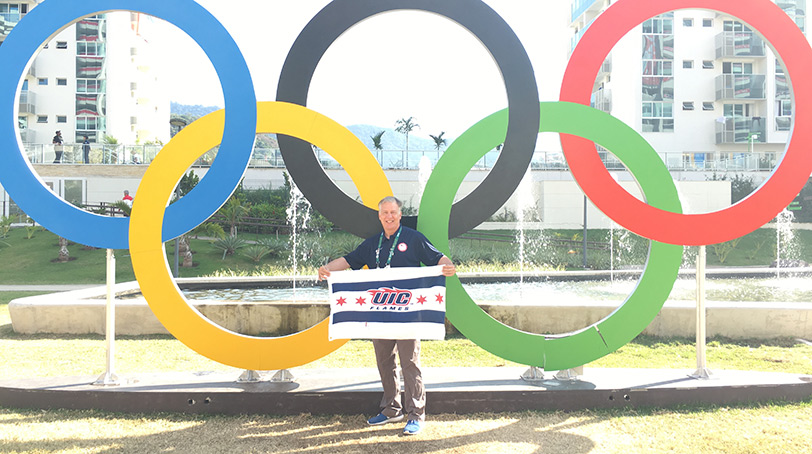 Dr. Hutchinson at the 2016 Olympic Games in Rio de Janeiro. 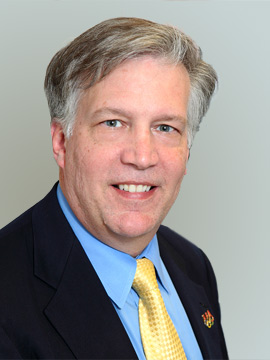 Being part of the Team USA medical staff at the 2016 Olympic Games in Rio de Janeiro was a dream come true for Dr. Mark Hutchinson, director of Sports Medicine at UI Health and head physician for the UIC Flames.

The dream continues, as Hutchinson was selected by the U.S. Olympic Committee again to work with Team USA athletes at the 2020 Olympic Games in Tokyo in July.

In 2016, Hutchinson worked primarily with the U.S. gymnastics team. As part of the medical team, he used his training to help athletes maintain their health and performance.

"I also had the chance to admire the tenacity and drive of the athletes," Hutchinson said. "I've witnessed several Olympic moments where someone overcame adversity."

One small moment stands out to him: when an athlete sheepishly entered his clinic to help with a broken ... wristband.

"When I asked him about the wristband, he told me that his baby was born a week before and he wanted to compete wearing his baby's wristband. We were able to fix it so it wouldn't fall off," Hutchinson said. "Later on, I saw the athlete with the wristband on television and in photos. I believe he won a bronze medal. This was one of those beautiful moments in which I got a glimpse of what motivates someone.

"The athletes are what makes the Olympic Games special," he said.

Hutchinson said he strives to be supportive of athletes because he wants to help them reach their goals. It is this mindset, he believes, that helped him reach his career-long goal.

"I started volunteering for the Olympic training center two years into my practice with the university," Hutchinson said. "I kept volunteering, making myself available and worked really hard. Once you start getting involved, you recognize that it's really not about you. It's all about the athletes - their performance and optimization. If you really focus on that, then people will continue to advance you because your mission is consistent with their mission. This mentality was key to being selected for the U.S. Olympic medical team."

One thing Hutchinson hopes for at the 2020 Olympics in Tokyo is to meet Yukio Kasaya, the first Japanese athlete to win a gold medal at the 1972 Winter Olympics in Sapporo.

"Yukio Kasaya was really an Olympic inspiration for me as a child," Hutchinson said. "A few years back, I got an invite from the International Olympic Committee to participate in a study in Lausanne, Switzerland. While I was there, I visited the Olympic Museum and I saw that they had Yukio Kasaya's ski jumping shoes. It was truly amazing. My guess is that, with Japan hosting the Olympics, he will probably be around. Having the opportunity to meet him would be phenomenal."

For the 2020 Olympic Games in Japan, Hutchinson will be "UIC Proud."

"I brought a UIC flag to Rio and took pictures to make sure UIC knew they were at the Olympics. I will do the same thing in Tokyo," Hutchinson said. "One of my greatest experiences was knowing that so many of my UIC colleagues felt pride that one of their own was there. I had a lot of support between my colleagues, the College of Medicine and the UIC chancellor. I cherish it and lived a blessed life being able to do it."