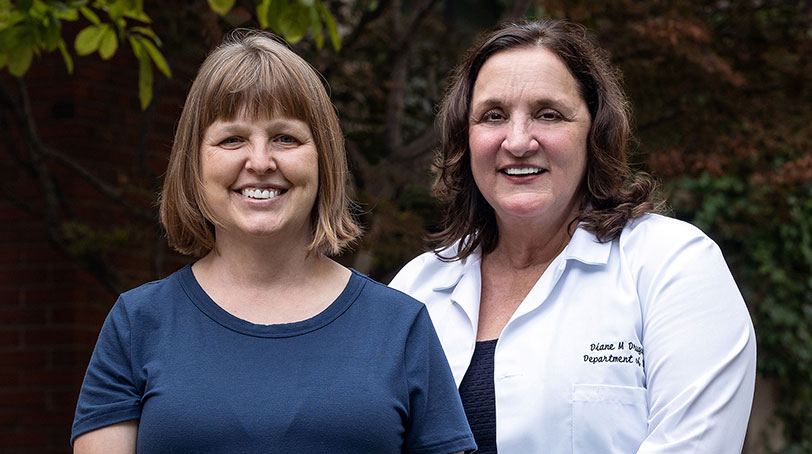 While Isemonger, of Minooka, Illinois, felt comfortable having a preventive hysterectomy that same year, she was hesitant about undergoing a mastectomy that would visibly change her body and could affect her mental health, body image, and confidence. So, she waited, but she didn’t stop worrying. Then she had a scare.

“Time had gone by, and I developed a cyst. I decided to do the surgery to not have to worry anymore,” Isemonger said. “I decided that I didn’t want to have the choice removed. My chances would only get higher.”

In April, Isemonger became one of a few patients in the U.S. and the first patient at UI Health to have a robotic-assisted nipple-sparing double mastectomy — a procedure Isemonger’s doctor said is nearly scarless.

“There is only a 2- to 3-centimeter scar in the armpit. It’s basically scarless,” said Dr. Diane Drugas, a breast surgeon at UI Health and assistant professor of clinical surgery at the University of Illinois Chicago. “And with the robotic approach, there is typically less pain and quicker recovery for the patient.”

Drugas said that while good outcomes and cosmetic results are still possible with a traditional mastectomy, the smaller incision of a robotic approach also can help alleviate patient fears about asymmetry and results.

‘It was One and Done. Less Scaring, Less Everything.’

“It was one and done. Less scarring, less everything,” Isemonger said. “It went really well. The surgeon was very impressed with my outcomes and recovery.”

“A robotic mastectomy can help preserve blood supply to the breast and maximize what a plastic surgeon can do for reconstruction, which is important for patient satisfaction. I’m excited about the future of aesthetic breast reconstruction with this technique,” Purnell said. UI Health surgeons performed their second robotic-assisted preventive mastectomy with reconstruction Sept. 3. The surgeons said a third procedure is being scheduled and is likely to take place in November.

Drugas said that in the U.S., the robotic nipple-sparing mastectomy with reconstruction currently is only recommended for some patients who need surgery to prevent cancer, such as patients with gene mutations, or patients with cancer who are enrolled in approved clinical trials and need surgery to treat early-stage breast tumors.

“There are many benefits to this procedure, but that doesn’t mean it is automatically the best one for every patient,” Drugas said. “For example, the robotic combined surgery is typically an hour or two longer than traditional surgery, and some patients are not medically fit for a longer operation. We also look at breast size, tumor size, and tumor location, and if the patient can fit an implant.”

The surgeon is hopeful that with additional studies, the procedure, which is more common in Europe, could help more patients in the future.

“I think it will catch on. The trend is to preserve the nipple, and patients want better cosmetic outcomes,” Drugas said. “It could be really wonderful for patients, especially in terms of positive body image and recovery.”

“Artificial intelligence and robotics will change the future of many surgeries, including breast surgery, allowing more precise, functional, scarless and cosmetic operations,” said Giulianotti, who is also vice-head of surgery at UIC and spearheads the robotic surgery and training program at UIC.

“I was nervous and scared at first, but now that it’s over, I am much more relieved,” Isemonger said. “If you have the chance and have that risk, do it. And, if you can do it robotically, that is even so much better. Don’t wait for cancer.”