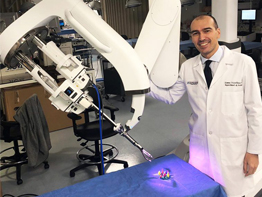 A new robotic surgery platform that requires just a single, small incision to perform minimally invasive surgical procedures can only be found in the Chicagoland area at UI Health.

With the Da Vinci Single Port (SP) Robotic System, surgeons can deploy up to three instruments and a camera at the end of a thin, flexible tube through a 3-centimeter-long incision.

"The new robot allows us to perform surgeries in an even more minimally invasive way through just a single incision, down from the four small incisions required for robotic-assisted surgery using our traditional surgical robot," said Dr. Simone Crivellaro, a urologic surgeon at UI Health. "The flexible camera also gives us much more freedom and many more angles from which we can view the procedure compared to previous generation robots where the camera was rigid,"

The robot is being used for a variety of minimally invasive procedures at the University of Illinois Hospital, but Crivellaro most frequently uses the new system to perform prostatectomy procedures to surgically treat prostate cancer at UI Health.

The SP System includes three multi-jointed, wristed instruments and a fully wristed 3DHD camera — a first in a robotic surgical system. The instruments and the camera all emerge through a single tube and provide 360 degrees of anatomical access.

"Smaller and fewer incisions translate to reduced pain, reduced chances for infection, and sometimes faster discharge from the hospital — all good things for our patients," said Dr. Pier Cristoforo Giulianotti, chief of the Division of General, Minimally Invasive, and Robotic surgery at UI Health.  Although primarily used for urological and urogenital surgeries, the SP robot also is being used at the hospital for certain standard pediatric surgeries, in addition to kidney-related procedures and to treat benign conditions.