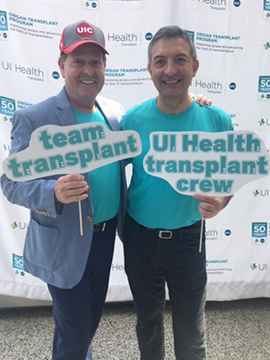 The Division of Transplantation at UI Health celebrated its 50th anniversary June 16 at Northerly Island.

Transplant patients - including Patrick Noel, one of only five patients worldwide to receive an identical twin living-donor bowel transplant - were on hand to celebrate. Special guests included Illinois Secretary of State Jesse White and Kevin Cmunt, CEO of Gift of Hope, the organ and tissue donor network. Brittney Payton, daughter of former Chicago Bear Walter Payton, emceed the event; the Walter Payton Liver Center at UI Health is one of the nation's premier research and medical centers dedicated to fighting liver disease.

The Transplant Program is well-known for its innovative use of robotic surgery. The surgical team, led by Dr. Enrico Benedetti, head of the Department of Surgery, pioneered the use of robotic surgery to be able to provide kidney transplantation to clinically obese patients who would have otherwise been denied a transplant. They published the first-ever report of a successful robotic kidney transplant in an obese patient in 2010. The hospital began offering this procedure in 2009 and since then physicians have performed 225 of these life-saving surgeries. To date, UI Health also has the largest living-donor intestinal transplantation program in the world.