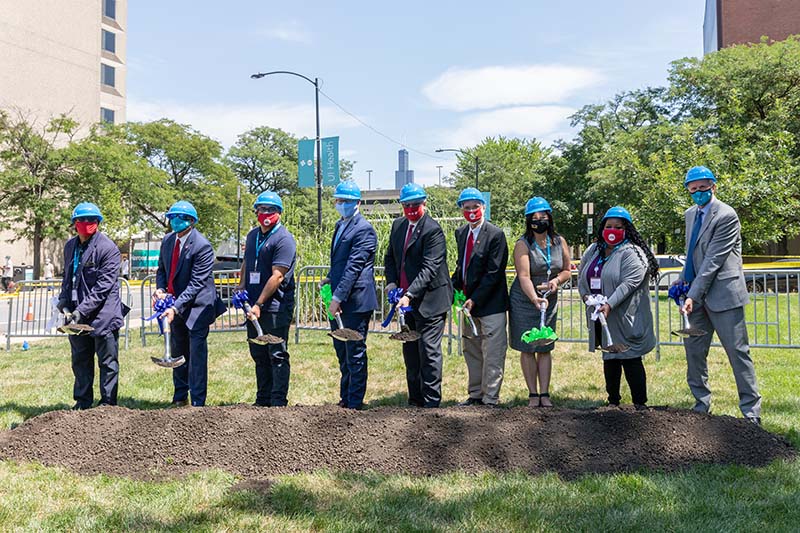 "It is a great pleasure this morning to welcome you to our university and to share this groundbreaking ceremony as a celebration of the future and as a sign of our strength and momentum as a university and healthcare delivery system, even during these unprecedented times," Chancellor Michael Amiridis said at a ceremonial groundbreaking at UI Health on Thursday, Aug. 13.

The event celebrated the commencement of construction activities for the Outpatient Surgery Center & Specialty Clinics building, which is the first new building for UI Health, UIC's  academic and clinical health enterprise, since 2014.

"We are so lucky to have the University of Illinois System as a flagship of higher education and health care," said Harmon, who represents Illinois' 39th District. Harmon said the pandemic has reminded everyone of the need to expand access to health care, and that "this is the right project, at the right time."

"Lives will be improved and even saved here. Doctors and nurses will be trained here. And facilities pressure created by the growing demand for the kind of care already offered by our medical professionals will be eased elsewhere within UI Health. The new center will also be an important tool in helping the U of I System fulfill its land-grant mission, to serve the state of Illinois and its people, to make their lives better, more prosperous and full of possibility," said Killeen.

UIC Vice Chancellor for Health Affairs Dr. Robert Barish said: "As the state's public, academic health enterprise, we have a distinct responsibility to translate the exceptional research and training of our university into outstanding patient care to better meet the needs of communities across Illinois and beyond. The Outpatient Surgery Center & Specialty Clinics will expand our capacity to deliver upon this promise - allowing for even greater access for patients who turn to us for their health needs."

According to Barish, these specialty clinics have outgrown their current space due to increasing patient demand for these services, which are among some of UI Health's top-ranked clinical programs.

The new building also will serve as an important economic driver for the state and the health care system's local communities, said Mike Zenn, CEO of the University of Illinois Hospital & Clinics.

Construction of the building, which is contracted to Pepper/Brown and Momen Construction, will employ approximately 500 individuals over the course of the two-year project, and approximately 30% of construction costs will be spent with local minority, women, persons with disabilities, and veteran-owned business, he said.

"Operations of the new building and expanded clinical services will create an estimated more than 100 full-time positions. The majority of these new jobs will be for positions that are part of the university's collective bargaining units," he said. "That is also our commitment to the health of our communities and the health of our constituents. All of this gives us a better platform to address the community health needs and continue our service as a market share leader in the core 26 ZIP codes that include communities throughout the West and South sides of Chicago. It is a significant tool in our drive to address the inequities of access which are at the core of disparities in health outcomes, of which we are all well aware."

The building will be constructed through a public-private partnership between UIC and Provident Resources Group, a 501(c)(3) corporation. Provident will finance nearly three-quarters of the cost of the $194 million building through tax-exempt bonds and lease the facility to UI Health during the 30-year term of the bonds.

Additional funding will come from the health system and private philanthropy. In November 2019, Bruno and Sallie Pasquinelli pledged $10 million through the Pasquinelli Family Foundation for the project. The contribution supports IGNITE: The Campaign for UIC and its goals to expand access to comprehensive, compassionate healthcare for populations across the State of Illinois. The commitment is the campaign's largest gift to date.

Completion of the project is expected in 2022.