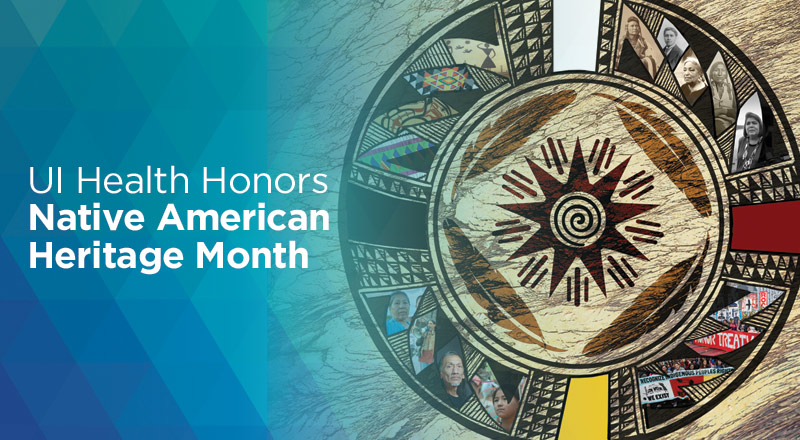 We acknowledge that the University of Illinois Chicago resides on the traditional Territories of the Three Fire Peoples - the Ojibwe, Odawa, and Bodewadmi, purchased after two-and-a-half years of open warfare, decades of violent encroachment, and the defeat of a pan-Indian movement to keep settlers out of the Great Lakes region at the Treaty of Chicago in 1821, receiving their final payment before moving westward in 1835. The area was also a site of trade, gathering, and healing for more than a dozen other Native tribes.

Native American Heritage Month was declared a monthlong observance in 1990 to celebrate and honor the achievements and numerous contributions that Native Americans have made to our country.

Here in Chicago, Native American history and culture are as important to our past as to our present. While there are different versions of the city’s name in history, it cannot be disputed that the origin of Chicago’s name, shikaakwa, was originally the Indigenous term for the area that was Now, Chicago is home to one of the largest urban Native American communities in the United States. More than 65,000 Native Americans are in the Chicagoland area today, with the Brighton Park and Lakeview neighborhoods having the largest population of Native Americans in the city.

As part of the University of Illinois Chicago (UIC), UI Health is proud to ensure the importance of the history of the land we occupy and that the present Indigenous communities in our area are foundational to our institution.

In this spirit, UI Health has adopted the UIC campaign, ‘Acknowledge is a Verb.’ This educational campaign seeks to move beyond a simple land acknowledgment in words but also in action. Action includes providing educational resources, developing supportive relationships with Native American communities and people, as well as encouraging policies that ensure UIC and UI Health are inclusive spaces for students, staff, patients, and the public.

Although this campaign began in recent years, UIC has long strived to be an organization that supports Native American and Indigenous communities. For over 50 years, the Native American Support Program (NASP) at UIC has supported and advocated for the Native American, Alaskan Native, Native Hawaiian, Pacific Islander, and other indigenous students and worked to engage and inform the Chicago community of Indigenous cultures. One of the ways this has developed into intentional action is through the formation of the Native American Task Force. In 2021, they released their first report on the current status of Native Americans on the UIC campus and their recommendations to move the organization forward in advancing Native visibility and voice.

UIC also has embraced honoring the land we hold through the UIC Heritage Garden Shikaakwa Satellite site. In the summer of 2015, UIC began collaborating with the American Indian Center of Chicago (AIC) to create this space. The garden uniquely boasts wild plants native to the Chicago area. It includes many plants from the AIC Medicinal Prairie Garden, which grows medical plants used by Chicago American Indian community members.

UI Health recognizes the specific challenges numerous Indigenous people face in Chicago and throughout the country. Challenges impacting their psychological well-being, educational achievement, physical wellness, and sense of belonging in various settings. We look forward to continuing our work to ensure UI Health is an inclusive place where everyone can authentically give and receive the excellent care and learning we provide.