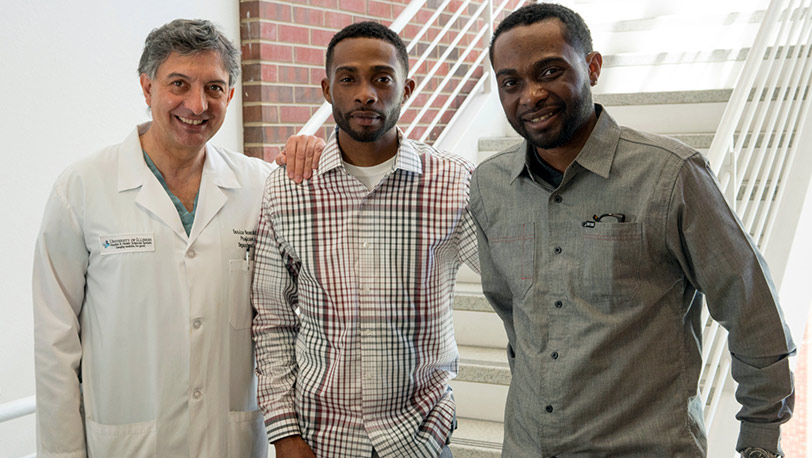 Patrick Noel was on his way home from his brother's house on July 24, 2016, when a car pulled up next to him. Patrick was pulled over on the side of the road and getting out of his car. The young man in the other car asked if Patrick lived in the neighborhood. Sensing something was wrong, Patrick hesitated briefly but said that yes, he was from Calumet City. The man looked at Patrick, pulled out a gun, and shot at him 10 times before driving off. Six of the shots hit Patrick; one grazed his head, others hit his back, foot, and leg.

One of the bullets pierced the blood vessels supplying his small intestines, and the organ began to die off rapidly.

Patrick, 32, was rushed to a nearby hospital, where surgeons removed the bullets, as well as the entirety of his small bowel and about half his colon, which also was impacted by the loss of blood. For months, his stomach emptied directly outside his body into a bag. Despite receiving nutrition through a tube in his vein, Patrick was losing weight rapidly.

Doctors at the local hospital said that Patrick may eventually need a small bowel transplant. The small bowel, also known as the small intestines, is responsible for absorbing nutrients from food. When it is damaged or removed, patients receive nutrition intravenously. But the risks associated with long-term intravenous feeding are high and include line infections and liver failure.

"When the doctors found out that I was Patrick's twin, they hinted that down the road I might be asked to donate part of my small bowel to him, and I was fine with that right from the start," said Derrick. 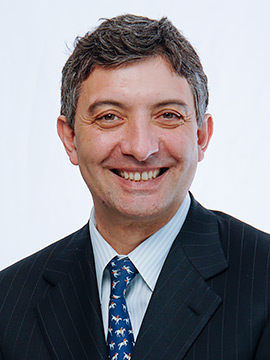 In September, Patrick was referred to Dr. Enrico Benedetti, head of the Department of Surgery at UI Health. Benedetti is a renowned transplant surgeon and has performed approximately two-thirds of the world's small bowel living donor transplants. He is one of just four surgeons worldwide to have performed an identical twin living-donor small bowel transplant.

It looked like Patrick had found another perfect match.

"When I found out that Patrick had an identical twin willing to make the donation, I knew that a living-donor transplant would not only be possible, but because his brother Derrick is a genetic match, he is also a perfect match, and Patrick would not have to take immunosuppressive drugs for the rest of his life to ensure the organ is not rejected," Benedetti said. "Rejection and infection are the two main concerns for any transplant, especially opportunistic infections that arise due to the immune-suppressing, anti-rejection drugs. Because of Derrick, Patrick effectively avoids both these risks."

Derrick never thought twice about undergoing an operation to donate part of his small intestine to his brother. "He didn't ask any questions," Patrick said. "He just said, 'yes'."

Before Benedetti could do the transplant, which wouldn't be for a few more months, he wanted Patrick to be able to at least drink broths and eat soups and other soft foods, in addition to continuing intravenous feeding. "If he could absorb at least some water through his remaining bowel, it would be a big improvement," Benedetti said. Benedetti performed an initial surgery to attach the bottom of Patrick's stomach to what was left of his bowel. In the next few weeks, his weight loss slowed. 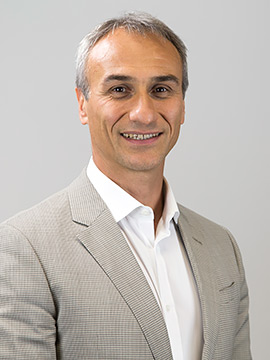 Finally, on April 27, 2017, the Noel twins went to surgery. Benedetti and Dr. Ivo Tzvetanov, chief of the Division of Transplantation at UI Health, removed about 7 feet of small intestine from Derrick - the average person has about 20 feet of small intestine - and used it to connect Patrick's stomach and large intestine. The surgery went smoothly, and both brothers recovered rapidly.

Although Patrick is still temporarily receiving intravenous nutrition, he has been able to eat solid foods, including his favorite, jerk chicken.

Derrick is planning to return to work as a barber before the end of June. Patrick continues to gain weight and strength at home.