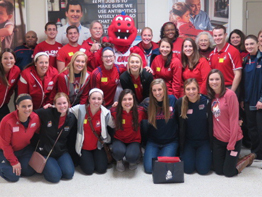 A group of UIC student-athletes, coaches, and staff, along with the Flames' official junior mascot Sparky Jr., spent time on the west side of campus on Monday (December 14) at the University of Illinois Hospital, where they handed out gifts and candy to more than 50 children who are patients.

"It was really nice to spend time giving back to our community," said SAAC president Dana Capocci. "The amount of presents and candy the Athletic department gathered together was amazing and far outnumbered the amount of kids that were at the hospital. Our brief visit with each child or family seemed to bring them a bit of holiday cheer. Parents were overwhelmingly thankful and the children's faces lit up when they opened their new toys."

The Flames made stops in the Children's Hospital of Illinois (CHUI) and the Child and Youth Center, where the kids received presents such as puzzles, coloring books and games, and also interacted with Sparky Jr.

Over the past month, UIC Athletics gathered donations to help make the kids' holiday season brighter. This past Friday (December 11), the Flames assembled the gifts into stockings and were assisted by UIC alum Curtis Granderson.