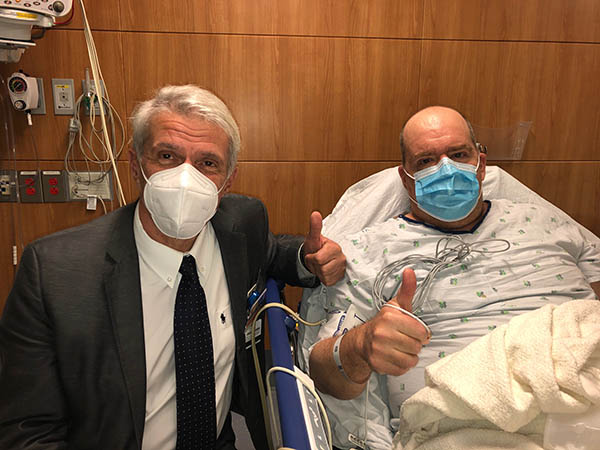 Surgeons at the University of Illinois Hospital & Clinics have performed the world’s first robotic-assisted double-kidney removal followed immediately by a living-donor kidney transplant in a patient with severe polycystic kidney disease (PKD).

Christopher Adamsick, 50, of Yorkville, Illinois, underwent the procedure Sept. 24. Only a few days later, he reports being in high spirits and “very little pain.”

Polycystic kidney disease is the fourth most common cause of renal failure in the United States, with approximately 150,000 Americans affected. It is an inherited disease in which clusters of fluid-filled cysts develop in the kidneys. These cysts can cause the kidneys to enlarge and lose proper function, leading to end-stage kidney disease.

A kidney transplant is the only cure for the disease.

Adamsick has had polycystic kidney disease for many years and was on dialysis for five weeks before a transplant became available at UI Health. He said he is happy to have such small surgical scars — just one 6-inch incision and five small incisions where the robot’s arms and instruments entered his body.

“The disease can be very painful,” said Dr. Stephen Bartlett, a visiting clinical professor of surgery at UIC. “We always remove both kidneys when transplanting polycystic kidney patients. The cysts are not only painful, but they can rupture and cause internal bleeding and infection, and sometimes they get so big — up to the size of cantaloupes — that they squeeze the stomach and the person can’t get adequate nutrition and they lose weight.”

Bartlett pioneered the surgical removal of both kidneys — called a double nephrectomy — followed immediately by a kidney transplant to treat polycystic kidney disease years ago as chair of the department of surgery at the University of Maryland School of Medicine. The open surgical technique required an incision from the base of the sternum to the pubic bone. Some incisions can be up to 14 inches long.

“Traditionally, these patients had their kidneys removed first, went onto dialysis during recovery and were transplanted later in a second operation,” Bartlett said. “We combined the two procedures so that the person has one surgery instead of two and has a functional kidney when it’s all over to help them in the recovery.”

The next logical step, Bartlett said, was performing the combined surgery robotically to reduce the size of the incisions and improve recovery. When he was asked to join the UI Health transplant team, who have successfully demonstrated that robotic surgery can be used to improve recovery for numerous traditionally performed open surgeries, he jumped at the chance and came on board in February 2020.

Adamsick was an ideal patient for the robotic double nephrectomy and transplant, said Dr. Enrico Benedetti, the head of the Department of Surgery at UI Health, because of his weight.

“It’s harder for obese patients to be approved for transplant because there is a higher risk of complications,” Benedetti said, “but we have shown that robotic-assisted kidney transplant for obese patients is safe, and patients have fewer surgical complications because the incisions are smaller. So, when a kidney became available for him, we decided to do the double nephrectomy and transplant robotically during one procedure.”

Giulianotti expects that Adamsick won’t be the only patient to undergo this unique surgical procedure for long.

“Polycystic kidney disease is very common, and the suffering associated with not only the disease but the traditional open surgery for transplantation and kidney removal is high,” Giulianotti said. “This first case should be very encouraging to patients with PKD who need transplants. The surgery is much less traumatic, and that our patient is doing well and reporting almost no pain only three days later is really promising.”