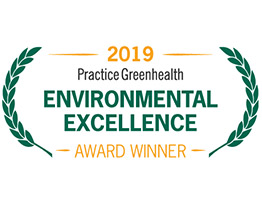 This competitive award recognizes the top 20% of applicants and is focused on advanced sustainability programs and exemplary scores in a range of categories.

The UI Health Green Team has been working on many initiatives throughout the past year to promote sustainability and environmental stewardship by increasing our hospital recycling rate, decreasing food waste, and engaging and educating staff.

To improve recycling rates, the Green Team developed and implemented the Saline Bottle and Blue Wrap Recycling Pilot in the Operating Room, which collects many of the clinical plastics that are being thrown away during surgery, with the goal of expanding this pilot throughout other areas of the hospital in the next year.

In conjunction with other recycling initiatives, these efforts resulted in a 10% increase in hospital recycling over the last two years.

Additional "green" initiatives include the Food Recovery Program, which captures the surplus of perishable food from the hospital kitchen and donates it to the Franciscan House, the second largest homeless shelter in Chicago, and the Annual Earth Day Fair, which invites staff and guests to stop by and learn about ways to incorporate "green" practices into their daily lives.