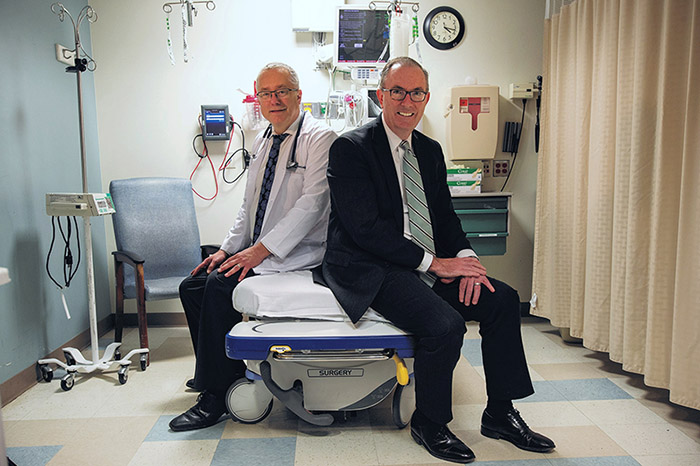 Twenty-five additional homeless patients will have a new place to live through the University of Illinois Hospital’s Better Health Through Housing program.

The hospital will provide an additional $250,000 to help place chronically homeless emergency department patients into permanent housing. Case-management services will be provided by the Center for Housing and Health. The program launched as a pilot project in 2015 with $250,000 from the hospital. It initially assisted 26 patients.

“We are an urban health system engaged in tackling complex social issues that affect health,” said Dr. Robert Barish, vice chancellor for health affairs at UI Health. “Lack of housing has been shown to have serious health effects. Without a home base, getting and staying healthy is extremely difficult, and this is why we have decided to reinvest in this program.”

“We are at the interface between the health care system and the community, and as such, we can use what we see in the emergency department to help us think about how to meet unmet needs in the community,” said Dr. Terry Vanden Hoek, head of emergency medicine at UI Health.

“We have a committee that meets regularly and we look over the whole picture, including from a cost-savings point of view, but more importantly, we consider how helpful providing permanent housing would be to a particular patient’s overall health,” said Steve Brown, director of preventive emergency medicine at UI Health and director of the Better Health Through Housing program. “Chronically ill patients who have multiple diseases that require frequent outpatient visits may be able to benefit most from the program.”

The hospital pays $1,000 per month toward housing for each patient in the program. The investment can be significantly less than the $3,000 per day the hospital can spend on some chronically homeless patients seen in the emergency department. Subsidies from U.S. Department of Housing and Urban Development also help cover housing costs.

Eleven patients who were housed during the pilot program still live in housing units located mainly on the West and South sides of Chicago and managed by nonprofit agencies. Four participants have died; one has entered hospice; eight left the program for various reasons; and two could not live independently, Brown explained.  “Figuring out whether a particular client will do better in a group housing situation with more support compared to a standalone apartment could help improve the success of the program,” Brown said. “Some clients need more structure and support than others, and some patients don’t do well in a group situation. We need to take that into account up front.”

Healthcare cost changes associated with the pilot program were calculated by the Center for Housing and Health. The average monthly healthcare cost per client was $5,879 per month before being placed into housing. Average monthly costs per client after housing dropped to $4,785, a reduction of about 18 percent. Cost reductions may be even greater, Brown explained, since the calculations only include costs linked to care received at the University of Illinois Hospital. “Many of our clients — and homeless patients, in general — often go to numerous emergency departments to get care, so cost reductions could be greater than what we are able to calculate without access to other hospitals’ data,” Brown said.

The pilot program also illuminated the magnitude of the problem of homelessness among patients in the healthcare system. 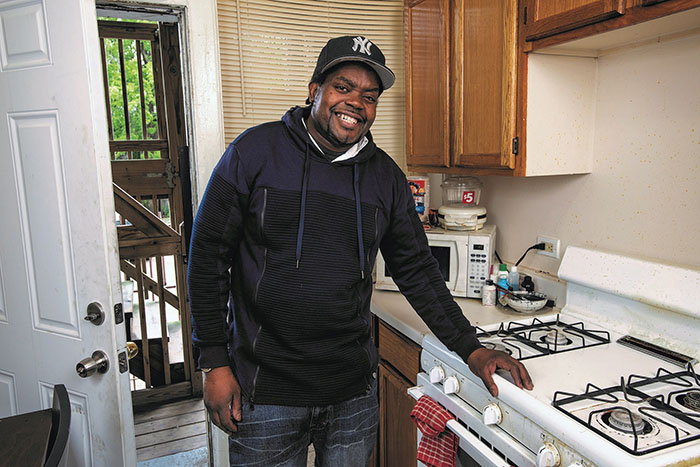 Glenn Baker was housed during the pilot phase of the Better Health Through Housing program.

“We are still amazed at how homelessness can be invisible in health care,” said Brown. “We originally looked into our electronic medical record before the pilot program began to see if we could estimate the number of chronically homeless patients in the emergency department, and we thought there were about 48. What we’ve discovered since then is that there have been 616 chronically homeless patients that have come through our doors over the course of the last 18 months, and that the social determinants of health – factors that have a profound impact on health, like housing status, food insecurity and utility needs – are rarely documented in electronic medical records.”

Looking back to 2010, Brown has found indicators that the emergency department has seen more than 3,400 homeless patients.

Studies indicate that up to 72 percent of homeless individuals have some kind of neurocognitive disorder, Brown said.

“We now screen patients we think may be homeless for these brain disorders so we can better treat them, and if they will be housed through our program, to help us determine the right mix of supportive services they’ll need,” he said.

“If every hospital in the area agreed to house 10 chronically homeless patients, which would be a relatively modest investment, we could collectively make a huge impact on reducing homelessness, and it would be near cost-neutral to every hospital,” he said.

“Once we can better identify these patients — and if we can do it sooner rather than later — we may be able to get them the care and services they need earlier, so that their health outcomes can be better,” Brown said.