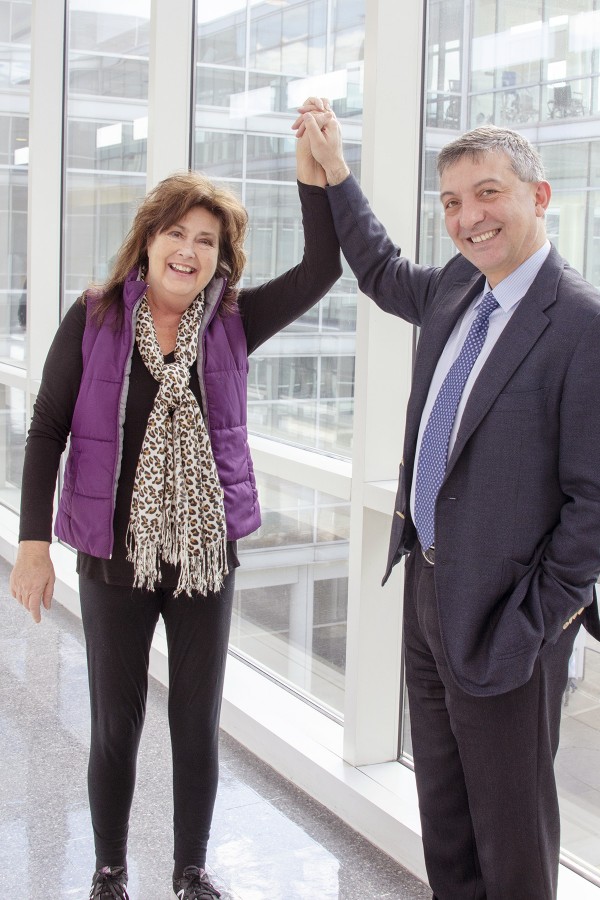 After many years on dialysis and on the transplant list to receive a donor kidney, Lana Schmidt had almost given up hope of surviving another year.

“With my age, my very high antibody levels, and 13 years on dialysis, there was little chance I would find a match and receive a kidney transplant,” said Schmidt, 58, of downstate Liberty, Illinois.

But on Jan. 30, in a final bid to save Schmidt’s life, Dr. Enrico Benedetti, professor and head of the Department of Surgery at UI Health, used an orphan drug called Eculizumab to suppress Schmidt’s antibodies before he and his surgical team implanted a kidney from a deceased donor.

The drug was infused just before the transplant and several more times in the following weeks.

Schmidt will need to take drugs for the rest of her life to prevent organ rejection. But she no longer needs dialysis, and she left the hospital March 20 in good health to return home.

Eculizumab was used once before at UI Health two years ago to enable a kidney transplant for another patient who had high levels of antibodies. But that patient’s organ had come from a living donor. Schmidt’s transplant is the first in the U.S. to use the protocol with a deceased donor’s organ.

Schmidt had developed extremely high levels of circulating antibodies due to more than 20 blood transfusions she required since developing Goodpasture’s syndrome 14 years ago. The rare and sometimes lethal autoimmune disorder attacks the kidneys and lungs. In Schmidt’s case, it destroyed her kidney function, forcing her to undergo dialysis several times a week to clean wastes from her blood.

Blood transfusions had helped to flush harmful immune cells from Schmidt’s blood. But even though donated blood is matched by type and other factors, it is never a perfect match to the recipient. Inevitably, antibodies to the donated blood begin to rise. It isn’t a major concern – unless the patient needs an organ transplant down the road.

“All those transfusions caused my body to develop so many antibodies, that any organ I might receive would be almost immediately rejected,” Schmidt said, “making me a terrible candidate to receive a donated kidney.”

But the risks of staying on dialysis long-term are “tremendous,” said Benedetti.

“The five-year survival for dialysis patients is just 30 percent, so Lana was really playing a life-and-death game every day she stayed on dialysis,” he said. “But her antibody situation made getting a kidney highly unlikely, which is why we suggested Eculizumab to her.”

Eculizumab was approved by the Federal Drug Administration in 2007 to treat another rare, life-threatening disease – one in which the immune system destroys red blood cells. Small studies done in living-donor transplantations showed that the drug could also inhibit organ rejection.

Three years ago, Schmidt – who had already spent 11 years doing dialysis herself at home every day – met UI Health outreach coordinator David Dreyfus when he spoke to her dialysis support group about new techniques UI Health was using in transplant. She then met with Benedetti, who suggested she try Eculizumab.

“I saw a news release on Kim Gosell and how Eculizumab suppressed her antibodies to let her get a transplant,” Schmidt said. “And I just called her up on the phone, and we’ve been friends ever since.” Her friend encouraged her to pursue the treatment.

Following an evaluation by Benedetti and approval from her insurance company, Schmidt was deemed a good candidate. About a year later, she received her kidney.

Benedetti said about 32,000 people on the waiting list for a kidney in the U.S. have little chance of getting one due to their high antibodies.
“Eculizumab could potentially help many others with high antibodies receive a kidney transplant and have a new life,” Benedetti said, “but larger studies are needed to prove the value of this strategy.”

Learn more about the Kidney Transplant Program at UI Health.