Kimberly Gosell had more than 40 friends and family who were willing to donate a kidney to restore her health -- and an immune system primed with harmful antibodies that would damage a new organ from any of them.

The 44-year-old mother of two teens had developed high levels of antibodies that attack foreign tissue, causing a positive crossmatch, which made finding a compatible donor for her nearly impossible.

To combat the destructive antibodies and render them harmless so she could receive a new kidney, her physicians at the University of Illinois Hospital and Health System gave Gosell an orphan drug that was shown -- in small studies -- to inhibit antibody-mediated rejection.

In some cases, a transplant can be performed even if a donor and recipient are not compatible. The patient must undergo several days of therapeutic plasma exchanges, or plasmapheresis, to remove antibodies from the blood. The patient is then given an infusion of immune globulin to mask the harmful antibodies along with a drug to suppress the immune system. 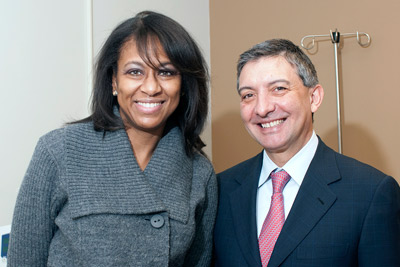 When antibodies against the donor's white blood cells decrease to very low levels and the crossmatch becomes negative, the patient is ready for transplant.

In Gosell's case, attempts to achieve a negative crossmatch with plasmapheresis were unsuccessful.

The orphan drug she received, Eculizumab, is a monoclonal antibody capable of blocking activation of the body's complement system, a group of proteins in the blood that are ultimately responsible for the damage to the transplanted organ. In previous studies, kidney transplant patients with a positive crossmatch were treated with plasmapheresis to remove antibodies from the blood until a negative cross-match was achieved. Then Eculizumab was used to reduce the rate of antibody-mediated rejection.

"This was her only hope for a transplant," said Dr. Enrico Benedetti, professor and head of surgery at the University of Illinois Hospital, who believes this is the first time that the drug has been used in a patient with a persistently highly positive crossmatch. The transplant team that performed the procedure also included Dr. Jose Oberholzer.

Gosell received an injection of Eculizumab a few hours before receiving one of her father's kidneys on Feb. 13. She will continue to have periodic injections of the drug for up to several weeks following the transplant.

The drug "may allow successful kidney transplantation even in patients who are usually excluded from transplant," said Benedetti.

"We would not have dared to do the transplant in our center without the protection of the drug," he said.

Gosell, a UIC employee, received a previous living-donor kidney from her cousin in 2008. That transplant was unsuccessful, and she spent the last two-and-a-half years on dialysis in declining health.

"I am humbled and grateful for my dad," said Gosell.

She says she named her new kidney "Faith."

Gosell has been supported by wonderful friends and family and shares her journey with them on Facebook.

In one of her recent posts she writes, "Notes from Kidneyland - Faith and I are coexisting in a beautiful fashion. She is quite the lifesaver!"