Collaborative Care to the Rescue 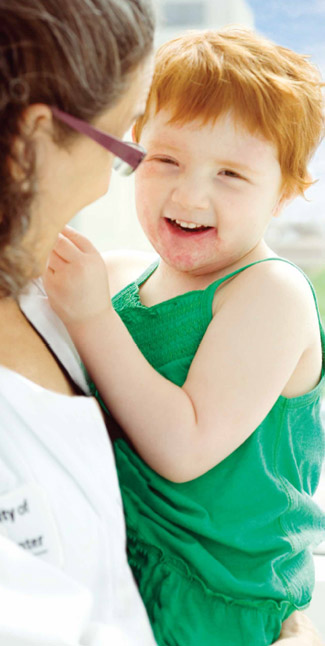 Today, Alyra Fallon is a typical 3-year-old-a fiery red-head who is outgoing and inquisitive. But, shortly after her daughter was born, Alyra's mom, Heather, noticed something out of the ordinary-a shadow across Alyra's face.

The shadow was diagnosed as a hemangioma, a benign tumor composed of blood vessels that spread across Alyra's bottom right lip and the entire right side of her face, surrounding her eye. A tiny ulceration on her lip quickly became a prominent wound.

Alyra was only a week old when the Fallons went to the University of Illinois Hospital & Health Sciences System. There they met Dr. Mary Lou Schmidt, head of the division of Pediatric Hematology/Oncology at the Children's Hospital University of Illinois. Schmidt was the first one to attribute Alyra's symptoms to PHACES, an uncommon association between large infantile hemangiomas and birth anomalies of the brain, heart, eyes, skin and/or arteries.

PHACES is an acronym that stands for the parts of the body it often impacts with abnormalities: Posterior fossa, Hemangiomas, Arterial, Cardiac, Eye and Sternal. Alyra is one of only about 500 known cases of PHACES syndrome.

Schmidt put the Fallons in touch with Milwaukee Children's Hospital, where research on PHACES was being conducted. For the next few months, the family made a trip to Milwaukee every two weeks with follow-up at Children's Hospital University of Illinois while she received prednisone, a steroid drug.

"On the surface, we thought prednisone worked for her, but she ended up having stridor (wheezing and a tight airway) and her wounds increased," says Fallon. The other drug in the Milwaukee Children's Hospital clinical trial was vincristine, a chemotherapy drug, but this would have necessitated placing a Central IV in Alyra, which very likely would have put her at risk for a major infection.

It was at that time that Schmidt read an article in the New England Journal of Medicine about a study in France that described 11 babies with very large hemangiomas who were treated with propranolol, a heart medicine. One hundred percent of the babies responded without any major side effects.

Schmidt met with Fallon in the ICU and recommended propranolol for Alyra. "Even before the second dose you could see a difference. The stridor was gone, her hemangioma was a lot lighter and she could even open her right eye, which was being constricted by the hemangioma," says Fallon.

Alyra and her mom now visit the Children's Hospital University of Illinois for follow-ups about every two months. But the propranolol has been effective... with no complications. The multidisciplinary team at the Children's Hospital University of Illinois, led by Dr. Schmidt, has now treated more than a dozen babies with very significant hemanglomas with propranolol, with excellent results.

"Everyone at the University of Illinois Hospital & Health Sciences System has been fantastic, stepping up to take care of what needed to be done, and providing excellent care," she says. But Fallon particularly credits Schmidt's dedication and personal efforts for Alyra's successful treatment. "Without her commitment to her patients and staying on top of current research, Alyra might not be here today."

The Children's Hospital University of Illinois will be true to our commitment to the children of Illinois to provide compassionate, high-quality health care and be an acclaimed leader in advancing the art and science of medicine.