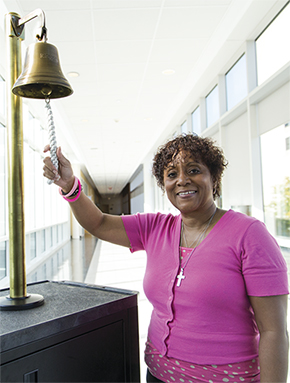 Two years ago, at age 56, I had a mammogram that showed a mass on my breast - about the size of a grape - that required further testing to diagnose. A Silver Lining Foundation, which helps provide mammograms and testing for people who can't afford it, referred me to University of Illinois Hospital & Health Sciences System because they're better equipped to make a diagnosis. A biopsy confirmed it was cancer.

I'm a healthy person - I eat right, I exercise, I don't smoke and no one in my family has ever had breast cancer - so I couldn't believe it. But I didn't dwell on it. My main concern was for my daughters, who are 37 and 27 years old. I wanted to set a good example and be there for them and my two grandchildren, so I scheduled surgery.

I met with my surgeon, Dr. Warso, before the surgery, and he explained what to expect during and after the procedure.

Fortunately the mass was confined to the milk ducts of my right breast and didn't spread anywhere else. He did a lumpectomy and removed some lymph nodes from under my arm. Surgery was quick, and I wasn't in any pain afterward. In fact, I was back at work just a few days later - my daughters were amazed.

After a follow-up scan to make sure everything was clear, I met with my radiation oncologist, Dr. Halpern, to begin radiation treatments. I had a total of 33 treatments over three months. I'd go to my appointments straight from work - sometimes after a hard day and not in the best mood. But the people in the radiation department, from the front desk and nurses' station to the radiation crew, were always so kind and put me at ease.

As of my last mammogram, everything is clear and I'm healthy. Before I was diagnosed, a friend of mine kept asking me if I was getting regular mammograms, and I finally had one after skipping several years. I'm glad I took her advice - usually, I'm the one giving people advice. Now I'm giving my daughters the same advice and making sure they get checked as well.

I'm so thankful for the care I received at UI Health and the kindness shown by everyone I came across over the course of my treatment. I feel blessed.