Dave Marszalek Found An All-Star Team To Save His Life

The transplant team at UI Health cared for Dave and Ashley throughout their journey. Their This is Personal video shows why they celebrate their transplant anniversary each year. 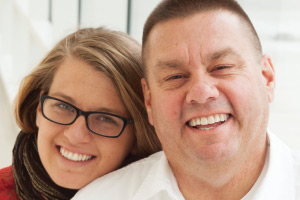 Dave and Ashley transformed their battle scars
into signs of hope with tattoos: “Thank you for
the gift of life Ashley” “Give life; be a donor.
You’re welcome, Dad”

"Anyone who's a parent knows you'll do whatever it takes to save your child's life. You never expect your child to do the same for you."

Dave Marszalek has been a tradesman at UI Health for nearly three decades. From construction projects to painting to system repair, he helps ensure that facilities look, function, and operate their best so that we can deliver the best experience to our patients.

In 2009, Dave was diagnosed primary sclerosing cholangitis, a rare liver disease probably best known for afflicting NFL Hall of Fame running back Walter Payton. In fact, Dave was among the crew that built out the Walter Payton Liver Center at UI Health, which opened in 2007.

In addition, cancer was found in Dave's bile ducts. Only a liver transplant would save his life. Fortunately for Dave, what he needed was close by.

Dave already knew first-hand that the Walter Payton Liver Center at UI Health was the best of the best. His team at UI Health found him the perfect liver donor — his daughter, Ashley.

Ashley was an exact match for a living-donor transplantation, a rare procedure where a portion of the donor's liver is removed and transplanted in the recipient. Both the remaining and received liver portions grow to normal size and provide normal, long-term liver function for the donor and recipient. Waiting on the organ-transplant list would have meant months or even years that Dave might not have had. Ashley's living donation saved his life.

"Dr. Hoonbae Jeon and Dr. Jose Oberholzer quarterbacked the all-star team of pros working to save my life. I knew I wouldn't get anything less at UI Health," says Dave. "It took the skill of our entire team — a transplant surgeon, gastroenterologist, radiation oncologist, medical oncologist, interventional radiologist — along with a 13-hour surgery and four months of radiation and chemotherapy, to make the most of Ashley's gift: a second chance at life for me."