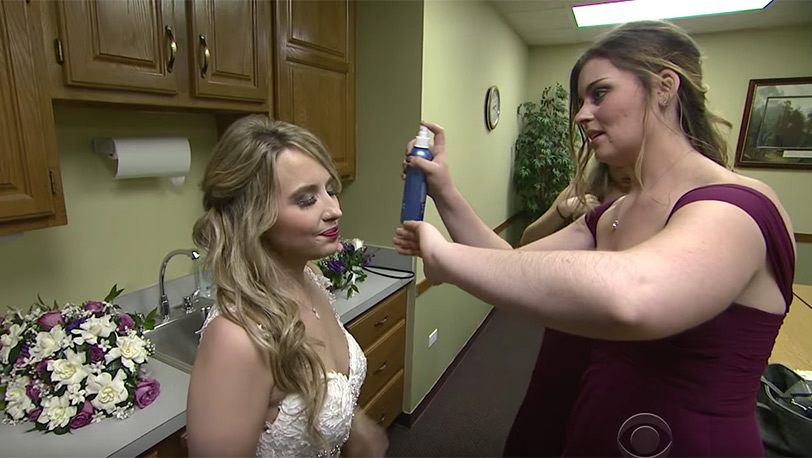 It was just before Heather Krueger's 25th birthday, in March 2014, when she was diagnosed with stage 4 liver disease. By June, she was in liver failure.

"I was told I had less than a 50 percent chance of living more than two months. It was traumatic," Krueger, told ABC.

Enter Chris Dempsey. Dempsey, who works for the village of Frankfort, Illinois, overheard a co-worker talking about a cousin — Krueger — who needed a liver transplant. Despite having never met the woman, he got tested to see if he was a match.

"I spent four years in the Marine Corps and learned there never to run away from anything, Dempsey told CBS." So, I just said to myself, 'Hey, if I can help, I'm going to help.'" So, Dempsey got tested.

"It's extremely hard to find a living donor. I had so many people who tested," Krueger told the Chicago Tribune.

To be a match, he needed to have the same blood type, be in good health, and have a similarly sized liver. Most people who get tested to be a living donor don't meet all the qualifications, but Dempsey was a perfect match.

"He called me and said the tests came out great, let's do this, I'm a match, I'm your donor," Krueger told ABC. "I couldn't believe it."

In March 2015, the pair underwent surgeries at UI Health — more than 8 hours long — to remove 55 percent of Chris' liver and transplant it into Krueger's body. The transplantation was successful Chris and Heather formed a relationship over the roughly two-month recovery process, and by the end of 2015 they were engaged. The couple was married Oct. 15, 2016, in Tinley Park, Illinois.

"You are the most incredible man I have ever known," Heather read in her vows. "You believe in me and you make me feel amazing every single day. Because of you, I laugh, smile and I dare to dream again."