Having to watch your child battle cancer is undoubtedly one of the hardest tasks that parents face in the halls and rooms of the University of Illinois Hospital & Health Sciences System. But having to watch two sons battle two different cancers? That's an ordeal for which there are no words. Susan Burdick says her family could not have made it through the last few years without the staff at Children's Hospital University of Illinois.

"I have never experienced such a bond with people who were not my family," says the mom of five boys from Earl Park, Ind.

Brendan Burdick, 9, and Robby Burdick, 13, are both thankfully in remission now, but it has been a long journey for their family. And the boys' experiences have been quite different. When Brendan was getting ready to start kindergarten, some routine blood work turned up something suspicious. It took months of investigation and several bone marrow tests to diagnose leukemia. Brendan went through several years of treatment. "We spent a lot of time in and out of the hospital," Burdick remembers. "We went to Chicago once a month for treatment." 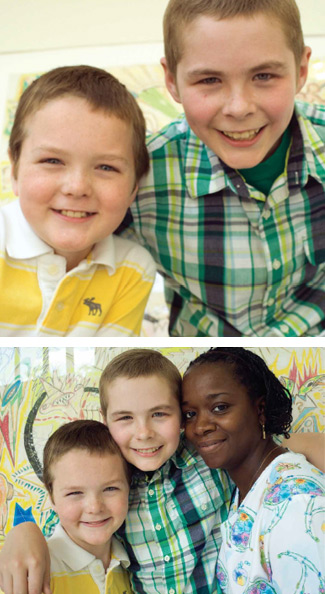 On Good Friday of 2010, Brendan had his last treatment. The family was thrilled. Two weeks later, Robby's leg shattered at school as he went over a vaulting horse. It was his 12th birthday. The X-ray showed a dark spot, which proved to be osteosarcoma. Before long, Robby was in the Children's Hospital University of Illinois, spending 18 consecutive weeks at the facility, although he often was allowed to come home on weekends. His family doctor had lined up a specialist at a hospital in Indianapolis but, to the Burdicks, that was never an option.

"We have doctors in Chicago, and I trust them," Burdick says. "I never second-guessed it. If they could make Brendan better, they could make Robby better." Burdick's unwavering attitude is emblematic of the whole family, says Mary Lou Schmidt, MD, head of the division of Pediatric Hematology/Oncology, who led Robby's care. "They are very loving," she says. "They have risen to the occasion twice, and the boys are thriving. Susan has always had an incredibly generous spirit."

Bruce Sharon, MD, associate professor of Clinical Pediatrics, was in charge of Brendan's care and knows the family well.

"Brendan is often boisterous during his visits, while Robert is usually more reserved," he says. "Both, however, have shown great focus in doing what needs to be done for their own medical care, while at the same time attending to another important priority: being a kid." In that, he credits their mom.

"In great measure, their healthful outlook is a reflection of the strength and determination of their mother, who has guided the family through this difficult ordeal," Sharon adds. Although Robby continues to rehabilitate his leg, he finished his chemo treatments on Valentine's Day. Burdick remains grateful for the innovative care provided by Schmidt and the University of Illinois Hospital & Health Sciences System team, who insisted on a customized prosthetic rod for Robby's leg that grows with him. Schmidt says it's simply the kind of thing that the pediatric hematology and oncology staff has been doing for decades for its young patients.

"We are extremely proud of our team," she says. "We consider it a privilege to apply all that we've learned to patients like Brendan and Robby."