Jason suffered two strokes, but thanks to the Comprehensive Stroke Center at UI Health, he's back on the court. His This is Personal video shows why he and Dr. Alaraj make a great team. 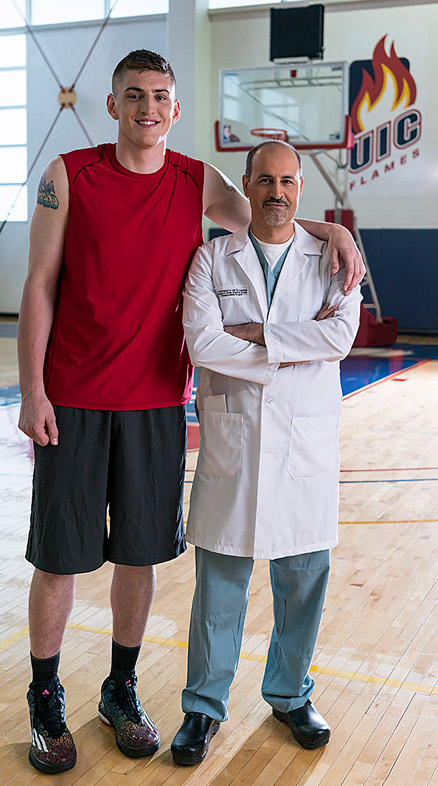 Back home in Colorado, on the night before my 22nd birthday, July 19, I was playing basketball with friends. Afterward, I went home and fell asleep. When I woke up in the morning, I couldn’t speak or move the right side of my body, and I had to crawl my way out to the hallway. Although I was awake and fully conscious, I had no idea that something was terribly wrong. My brother found me and called 911.

I was taken to the hospital, where they evaluated me and decided I needed surgery. When I woke up after surgery, they told me that I had a stroke. The moment I moved my right arm and uttered some broken words, my family broke down with relief — a moment I will never forget.

I had to relearn how to eat and write my own name, along with many other things. But once I recovered, I came back to school at UIC. My mom thought I should take the semester off and stay at home, but I was determined to finish it out.

One night about three months later, I was playing basketball at the rec center. I felt good, but I was exhausted. When I got home from the gym, I laid down to take a nap. When I woke up, I was having trouble speaking and noticed problems with my left arm. It felt similar to when I woke up after having the first stroke, but I didn’t think it could happen again, so I went back to sleep. What I should have realized is that these were clues that another stroke was coming and could have been avoided.

When I woke up again, I was having trouble talking and could not walk. My roommate knew my background with the other stroke — it was time to act fast so the stroke could be treated before it caused permanent damage.

He immediately called 911, and I was taken to UI Health. Without hesitation, I was brought back to the angio suite to have the blood clot on my brain removed. Dr. Alaraj saved my life.

Because the stroke team at UI Health did the procedure right away, they prevented any damage from the blood clot. Besides a slur in my speech, I didn’t experience any difficulty recovering like I did after the first stroke. Later, they explained to me that there is a specific procedure that the stroke team must follow, called “Stroke Code,” which means they can treat any stroke just minutes after you come in the ER door.

The team at UI Health was amazing. Every nurse I had was a godsend - they were the nicest, most comforting people. They've followed up with me a lot, too. The stroke team discovered that I have an enzyme deficiency that was causing a problem with my blood, which may have led to the strokes. Now, I take blood thinners to stay healthy.