Surgical Removal of the Breast

Most women with breast cancer have some type of surgery to treat the main breast tumor. The purpose of surgery is to remove as much of the cancer as possible. For most patients, a combination of surgery and medication (chemotherapy, radiation therapy, hormone therapy) is used to fully treat the cancer.

At the Center for Breast Care, our breast surgeons are experts in breast surgical oncology. They have advanced training in a number of highly specialized technologies and perform minimally invasive surgical procedures to remove tumors of the breast. Our surgeons also work closely with the medical oncologist, radiation oncologist and the breast reconstructive team to ensure the best treatment of the patients.

Today, women have many surgical options and choices. The type of surgery performed depends upon: 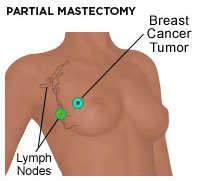 A partial (segmental) mastectomy (also called lumpectomy) involves the removal of the breast cancer and a portion of the normal breast tissue around the breast cancer (the areas removed during the surgery are shaded in green).

The removed tissue will be looked at to make sure that all cancer cells have been removed and to see if any cancer cells are left at the edges. Even if they are, breast conservation may still be possible with the removal of a small amount of additional tissue.

A mastectomy is surgery that removes the entire breast. All of the breast tissue is removed, sometimes along with other nearby tissues. The surgical oncologist may recommend a mastectomy as the best surgical option under the following circumstances (among others): 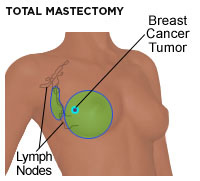 During a total mastectomy, the surgeon removes the entire breast, including the nipple and areola.

A skin-sparing mastectomy removes the breast tissue, while preserving the skin of the breast, but not the nipple or areola

A nipple/areola sparing mastectomy removes the breast tissue through an incision that preserves both the nipple and areola.

Often breast cancer spreads to the lymph nodes and they need to be removed so they do not spread more cancer through the body.