Choose from one of the following categories 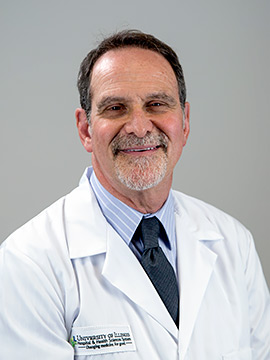 Request an Appointment Refer a Patient

get to know our provider

Dr. David Reisberg received his dental degree from Case Western Reserve University in 1977. He went on to receive a specialty certificate in Prosthodontics from Tufts University in Boston and one in Maxillofacial Prosthetics from The University of Chicago. He has been Director of the Maxillofacial Prosthetics Clinic at the University of Illinois Hospital & Health Sciences System since 1981. In 1998, he was named Medical Director of The Craniofacial Center, a position he held until 2010. He has served on the Board of Directors of the American Academy of Maxillofacial Prosthetics and is president-elect of that organization.  He is past president of the International Society for Maxillofacial Rehabilitation and the Illinois Association for Cleft/Craniofacial Teams and the current president of Ameriface, a national organization that supports people with facial differences. Dr. Reisberg is certified by the American Board of Prosthodontics. He has lectured nationally and internationally and is recognized as an authority on the application of osseointegrated implants for craniofacial rehabilitation.

At The Craniofacial Center, Dr. Reisberg specializes in the fabrication of oral and facial prostheses for infants, children and adults born with conditions such as cleft lip and palate and ectodermal dysplasia; who have undergone surgery to treat head and neck cancer; or who have suffered craniofacial trauma. He has extensive experience in the placement and restoration of dental implants and often works with The Center's surgical team to rehabilitate areas of the oral cavity and face.  He makes use of  the newest digital technology in planning, designing, and fabricating these prosthetic replacements. The goals of all of his treatment efforts  are directed toward achieving normal function and appearance and an overall improved quality of life for each patient.