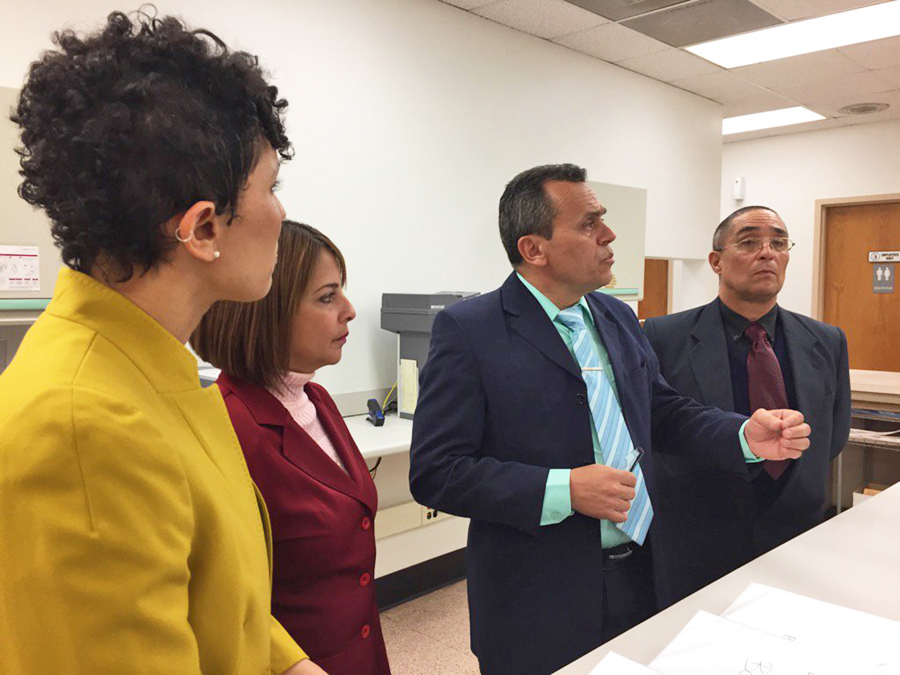 A historic visit to the United States by officials from the Cuban Ministry of Health marked the launch of a new partnership with UI Health, with the aim of collaborating on the development of improved care delivery systems that can be used in both countries

During the weeklong January visit, the Cuban officials joined UI Health leadership on visits to Mile Square Health Centers on the West Side, in Englewood, and in Back of the Yards, to observe how providers in the U.S. deliver healthcare in low-resource communities.

The trip, announced by UI Health in May and funded by a grant from the W.K. Kellogg Foundation to the University of Illinois Cancer Center, marked the first time Cuban health officials have made this type of health observation in the U.S. The Cuban delegates also met with leadership from the Infant Welfare Society, Chicago Department of Public Health, Greater Englewood Community Development Corporation, and Illinois Medical District.

“Just a short time ago it would have been very hard to imagine members of the Cuban Ministry of Health visiting Chicago to observe and exchange ideas with community health leaders here at UI Health and in Chicago, but … we are watching as exactly that comes to pass,” said UIC Chancellor Michael Amiridis. “The sharing of knowledge across borders and cultures is a practice we value very highly at UIC, and we take pride in participating in and fostering this historic exchange.”

“Delivering quality care in underserved communities with a focus on reducing health disparities is at the very foundation of what UI Health is all about, and is embodied by our community-based Mile Square Health Centers,” said Robert Barish, vice chancellor for health affairs at UI Health.

Dr. Robert Winn, former associate vice chancellor of community-based practice, said “the Cuban health system does preventive health very, very well, and they do it without a lot of money.

“We are hoping to work with our Cuban counterparts to identify practices that have worked for them, and also let them observe some of the ways we deliver health care that may be very different from how they operate, in the hopes that this exchange will lead to improved health for populations in both our countries,” Winn said.

“This visit has only been made possible by [former] President Obama’s work to normalize relations between the United States and Cuba, and we are proud to be engaging in this historic exchange for the benefit of the people in each of our countries, but also to cement and confirm President Obama’s legacy,” said Winn, who, with Kathy Tossas-Milligan, director of the UI Cancer Center’s Office of International Cancer Health Equity Partnerships, was recently invited to the White House to honor the opening of relations with Cuba.