The liver is the largest organ in the body and plays an important role in regulating many life processes. The liver weighs approximately 3–4 pounds and is roughly the size of a football. It is made up of a sponge-like mass of wedge-shaped sections called lobes. The liver is located in the upper-right side of the abdomen, below the diaphragm and above the stomach.  The liver is a very complex organ that performs many functions, including:

A healthy liver can regenerate (grow back), unlike any other organ in the body. There are illnesses, however, that can cause severe and irreversible damage to the liver.

Liver failure occurs when the liver is unable to perform its normal functions. A diseased liver can result from an acute (severe and immediate) failure as a result of an infection or drug reaction. Liver disease also may result from chronic (persistent) failure due to an ongoing viral infection, alcoholism, injury due to elevation in bilirubin, autoimmune disease, or as a result of primary liver cancer.

The liver normally has the great ability to heal itself and can overcome most injuries it experiences on a short-term basis. Occasionally, the liver is so severely injured it causes scar tissue to form in the liver without enough healthy cells left to regenerate. When all normal liver tissue is replaced by scar tissue, the liver is said to be cirrhotic and a liver transplant may be the only available treatment option. Patients with cirrhotic livers typically are under the care of a hepatologist — a physician who specializes in liver disease. In cases where liver transplant is necessary, the only other alternative option is palliative care, which focuses on providing relief from symptoms, anxiety, and stress, rather than focusing on active treatment. 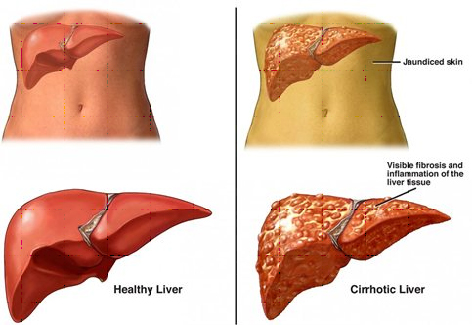