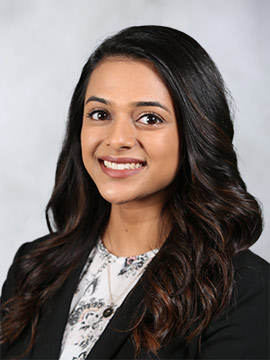 Kajal Dholakia
Kajal Dholakia grew up in Schaumburg, IL. She graduated from the University of Illinois at Chicago in 2019 with a Bachelor of Science in Kinesiology. Upon graduation, Kajal worked at ATI Physical Therapy where she was introduced to working with a multitude of patient populations. She learned through her clinic director the importance of creating organizational structure, overseeing daily operations, developing and attaining strategic goals, and enhancing the patient experience — drawing her to the management side of healthcare. Kajal moved to St. Louis, Missouri to pursue her Master of Healthcare Administration at Saint Louis University in the fall of 2020. While in St. Louis, Kajal interned at Mercy, one of the largest health systems in the nation which serves communities across Missouri, Oklahoma, Arkansas, and Kansas. During her time at Mercy, she was involved in a multitude of projects in various sectors of the health system. She applied Lean methodology to facilitate the standardization of surgical instrument ordering forms for both the outpatient and inpatient setting at Mercy Hospital St. Louis, enhancing sterile processing productivity. She also partnered with pharmacy leadership to initiate a pilot program for Comprehensive Medication Management, where she helped formulate a business plan and compiled billing data to assist in evaluation for reimbursement. Kajal continued her internship during her second year of graduate school and mainly collaborated with the Executive Director of Operations and Strategic Initiatives to facilitate the rollout of several strategic initiatives for Mercy Clinic. This included co-leading the first Innovation Design Session at Mercy, Covid-19 resource planning, implementing leadership rounding for the east community clinics, and managing strategic leadership meetings/retreats for primary care, the Board of Directors, and service line growth planning. Outside of her internship, Kajal served as a Finance and Development Lead at Saint Louis University's student-run clinic, the Health Resource Center, where free primary health care services are provided to the underserved population of St. Louis. She also joined SLU's contact tracing team for a Centers for Disease Control and Prevention (CDC) grant study which drove change in national policy. In her free time, Kajal enjoys cooking and creating new recipes for her food blog, watching documentaries, and going to the beach. 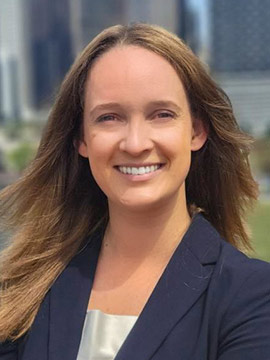 Olivia Ellsworth
Olivia Ellsworth grew up in Glenview, IL. She graduated from the University of Illinois Chicago in 2016 with a Bachelor of Science in Kinesiology. Upon graduating, Olivia took a gap year to travel internationally, then utilized her degree to work in physical therapy as a Rehabilitation Aide at Athletico Physical Therapy and volunteered within the inpatient physical therapy department at the Jesse Brown VA Medical Center. Through these experiences, she witnessed multiple gaps in healthcare and opportunities for improvement firsthand, which led her to want to be a part of not only improving direct patient care but also focusing on combating socioeconomic disparities outside the four walls of the hospital. Ensuring each person has access to healthcare and is capable of obtaining high-quality care are critical issues in the healthcare field and critical issues to Olivia. The experience she gained in these various healthcare settings helped solidify her career focus on healthcare administration in which she went back to the University of Illinois Chicago to pursue her Master's Degree in Healthcare Administration. Olivia then began working at Loyola University Medical Center as an Administrative Intern where she was able to build a strong foundation and understanding of the healthcare industry. There, she was responsible for developing a regional capacity surge plan that improved patient throughput by 20% from baseline. She also lead bi-monthly team meetings consisting of 10 department members and worked with data analysts to obtain data to understand the current state of each hospital in order to construct an ideal state process map to determine individual hospital triggers. As Olivia now transitions into the role of Administrative Fellow here at UI Health, she is eager to learn, grow and excel in healthcare management while consistently putting the patient first. In her free time, Olivia enjoys trying new restaurants, spending time with loved ones, and attending her monthly book club meetings.