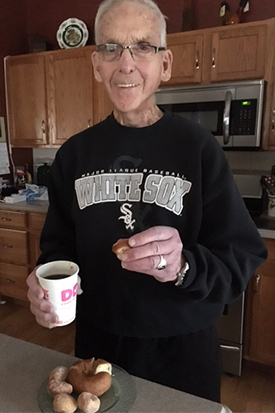 In an early edition of “Poor Richard’s Almanack,” Benjamin Franklin advised: “Eat to live, not live to eat.”

But the rotund Franklin, a noted consumer of rich foods and fine wines who suffered from gout — the “rich man’s disease” — didn’t follow his own advice. Franklin, like the overwhelming share of the population, didn’t have swallowing problems, and didn’t take it (and eating) for granted. And he most certainly didn’t meet Pete Carrara.

Carrara, 84, had failed several swallowing tests and had been told by several clinicians he couldn’t swallow and therefore couldn’t, and shouldn’t, try to eat normally. Radiation treatments for throat cancer many years ago had built a wall of scar tissue that left him with fibrosis that immobilized the muscles that facilitate swallowing. Recent treatment for prostate cancer resurfaced his swallowing problems.

Food was aspirating into his lungs, causing pneumonia, over this past New Year’s, and he lived tethered to a machine that pumped liquid medical food into his stomach. It literally allowed him to survive, but he and his longtime partner, Joanne Rohlicek, hardly called it living.

“I craved food, but I couldn’t say I was hungry,” Pete says. “You never think about eating.”

Most of us take eating for granted, Joanne notes — until we can’t anymore. Eating is a “body, mind, and soul experience,” she says. Pete, enduring cancer treatment, saw his quality of life suffer in more than one way.

Then they met Jan Potter Reed, MS, CCC-SLP, a licensed speech pathologist and voice specialist at the Chicago Institute for Voice Care at UI Health. Reed taught Carrara a relatively simple exercise that allowed him to swallow without aspirating food into his lungs.

“Jan is my angel,” Pete says. “She taught me how to swallow so I could eat real food again.”

Joanne was impressed with Reed’s kindness and focus on Pete from the outset.

“Jan asked Pete, ‘What would you like?’” she recalled. “I want a cup of coffee,” Pete replied.

Then, she said, Reed told them to “Come with me, and I’ll show you how to do that.” Reed brought Pete into her office, and showed him a technique she modified from one called the Mendelsohn Maneuver. In essence, the technique allows Pete to compensate for his inactive epiglottis — the spoon-like piece of cartilage at the root of the tongue that covers the windpipe when we swallow — by using air to form a barrier that keeps what’s swallowed from “going down the wrong way,” Reed says.
Reed taught Pete to swallow through a different way of breathing — by taking a breath, holding it, then taking a small bit of liquid or blended food, swallowing, and then exhaling. “That way, if there is something headed down toward the larynx and, ultimately, the trachea, exhaling will send the swallowed material toward the esophagus, which is where it should go,” Reed says.

“I didn’t want to get him in a situation where things would constantly go into his lungs,” she says. “It essentially teaches him to do what most of us can do naturally.”

Pete practiced the technique in her office, then left happy. The next day, he was sipping coffee. Soon after, he and Joanne began adding other foods, like popsicles and hot cereal, eventually adding more foods, including his favorite, pasta, to his diet. By late April, Carrara was eating fairly regularly and had cut the number of pumped-in meals from six to three per day, which he consumes while asleep. He’s off the feeding machine for most of his waking hours, and for the most part is ambulatory, even playing golf now.

Yet, even after he told his home-health providers, including speech-language pathologists, that he could swallow again, they were “adamant” that he not eat because of the risks, Joanne says.

What Reed told Pete to do, was try to eat what he could; if he didn’t aspirate (send swallowed material into his lungs), she said, keep going. Let him eat what he can eat, she said.

“He had a real quality-of-life issue. When you have multiple medical issues, why should we take away the joy of having breakfast or enjoying a nice Thanksgiving meal?” Reed says.

Reed recommended periodic chest X-rays to make sure nothing is trapped in his lungs, but aside from checking in with Reed by email, Pete and Joanne make the decisions about food, and their quality of life is much improved.

“It’s such a blessing to be able to enjoy this part of life with him again,” Joanne says. “There are angels in the world. Jan’s one of them.”