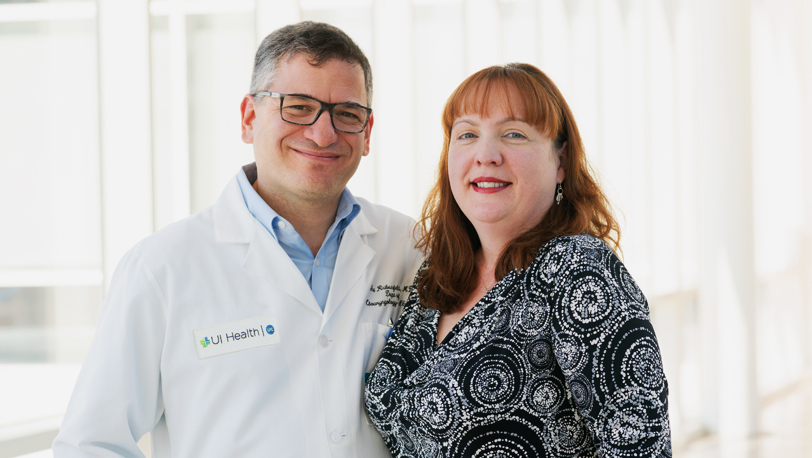 For years, Joy Castellanos, an administrative assistant in the University of Illinois College of Medicine, suffered from thyroid disease. However, doctors always told Joy that her thyroid was healthy because her thyroid-stimulating hormone (TSH) levels were in the “normal” range.

She struggled with a wide range of symptoms all tied to issues with her thyroid — hair loss and constant fatigue, among others — but doctors told Joy they were either related to women’s issues, were stress-induced, or, as one physician suggested, “just all in her head.”

“I was extremely frustrated because the doctors would simply look at my TSH results and declare that my thyroid was healthy when I was clearly exhibiting all the symptoms of hypothyroidism,” Joy recalled.

After seeing a number of doctors near her home in the western suburbs, she connected with
Dr. Ari Rubenfeld in the Department of Otolaryngology at UI Health.

“Joy had a compendium of non-specific symptoms that added up to greater systemic problems,” Rubenfeld said.

Upon his initial examination, Dr. Rubenfeld saw nothing abnormal and confirmed that her thyroid levels were within the normal range. But he remained concerned by her symptoms and suggested an in-clinic ultrasound of her thyroid, which immediately revealed the cause of Castellanos’ symptoms: Her thyroid twice its normal size.

“Dr. Rubenfeld took it to the next level, even though the examination found nothing wrong,” Joy said. “I really liked that because for so long other physicians had told me there was nothing wrong.”

Dr. Rubenfeld also referred Castellanos to the Division of Endocrinology for additional tests. After significant tests and additional consultation there, it was decided that Joy needed both thyroid and parathyroid surgery.

The results of the surgery for Joy were immediate.

“I’ve had several surgeries, but this was the best I’ve ever experienced,” Joy said. “Usually, when you come out of surgery you feel awful. But when I came out of this surgery, I felt immediately better, and mentally clear. I can’t even describe it — I felt like a new person.”

Dr. Rubenfeld says Joy’s complex case speaks to the need for the comprehensive, multidisciplinary care provided by the Thyroid Program at UI Health. “It was really connecting her to Endocrinology that made the difference in the end,” he said. “This case reinforces the general notion of collaborative care of our endocrine patients.”

Dr. Rubenfeld is part of a team working to establish a Thyroid Center of Excellence at UI Health. “It is a collaboration between all disciplines that work on thyroid and parathyroid care — Endocrinology, Otolaryngology, Pathology, Radiology, Nuclear Medicine, and General Surgery. It remains in its infancy of development, but we have full support to push ahead.”

For Joy, there still are health challenges, but she said her health is on the rise. And her peace of mind is intact, something she attributes in great part to Dr. Rubenfeld.

“I knew there was a problem when others were telling me it was in my head,” she said. “He was a lifesaver who vindicated me after so many years.”