Thanks To 2 Special Children and Her Doctors’ Skill, Amy Chan Says “Yes” To Life. 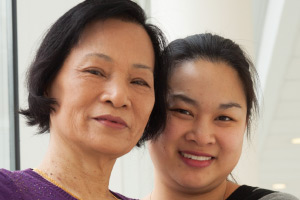 Amy says, "Dr. Jeon doesn't let a language
barrier keep him from connecting with his
patients. He always understands how I feel."

"When my doctor told me I'd need a liver transplant, I vowed I wouldn't do it."

I was against it even though I knew my liver was failing. I believed when it was my time, it was my time. I'd had a very good life; my husband and I came to the United States from China over 30 years ago. We owned and ran a restaurant, had two wonderful children and now have a beautiful granddaughter.

I never imagined I'd get so sick. As my liver continued to fail, so did my health. I was retaining fluid, which built up in my abdomen, putting pressure on my other organs. I was in the hospital more and more, and eventually every week.

I was so thankful for the wonderful staff at the Walter Payton Liver Center at UI Health. They saw to my every need. Even though I speak little English, we came to know each other well, with the help of a translator service they provided.

I could no longer work at our restaurant, and the pain became almost unbearable. Even more unbearable was the thought of not being able to see my only grandchild grow up. In July 2012, I finally agreed to go on the transplant list.

It wasn't a moment too soon; complications made my condition even worse, and I was moved higher on the list. In September, I was hospitalized and needed surgery. Although they weren't sure I'd make it through surgery, I did. But I found out I wouldn't be going home; I received the good news — they had a liver.

I was overjoyed but sad too; the liver was from a child who had died. I could only imagine the family's grief. I hoped they would find comfort in knowing their child helped save not just one life, but two. Because I'm small, a baby and I would share the liver thanks to their gift and a split liver transplant.

My transplant surgeon, Dr. Jeon, traveled to Wisconsin to perform the first phase of the transplant, the intricate split liver surgery. Within 12 hours of getting the news about the donated liver, I was in surgery. Another 12 hours later, I had a new liver and a new lease on life.

Today, my kids say I have more energy than they do. I have to! I have a young granddaughter to keep up with!