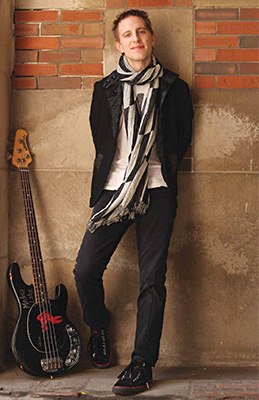 Matthew, His Twin Brother Nathan, And Their Chicago Based Alternative Band, Madina Lake, Are On a European Tour With Their Recently Released World War III Album.

"JUST AFTER MIDNIGHT IN JUNE OF 2010, I WAS HEADING HOME FROM MY TWIN BROTHER, NATHAN'S PLACE AND HEARD A WOMAN SCREAMING IN A WAY YOU ONLY HEAR IN MOVIES."

I ran across the street and threw myself at a guy who was simultaneously strangling and beating his wife. I managed to separate them and even to dial 911, but that's when he seriously turned his attention to me.

With a broken jaw, a broken nose and a fractured skull, I was taken to a hospital that was unable to handle the operation needed. The ambulance rushed me to the University of Illinois Hospital & Health Sciences System, where Dr. Neckrysh was poised to perform the surgery that prevented me from dying or going into a coma. He removed about a third of my skull to relieve the pressure of blood hemorrhaging from my brain.

It was 2 more surgeries to replace the skull. Maybe 6 months of exercising my brain all day long to regain memory, hearing, and the ability to think straight. Then, I could begin to recover the motor skills required to walk a half a block, then play an instrument, then, write a note of music.

The day I first regained consciousness, there was Dr. Neckrysh: calm and assuring me that I was still the same person. He's charismatic, and his confidence is exactly what a go-ahead person like me needs to go ahead. Throughout the last 18 months, he's listened, responded, reacted and overseen my return to my wife, my brother, our music... our dream."